About ten years ago, a video by comedian musicians Aleksey Igudesman and Hyung-ki Joo went viral in the piano world.  It was called “Rachmaninov Had Big Hands”.

This was not the first time anyone has ever tried to play the piano with pieces of wood.  The inspiration for Igudesman and Joo could have come from Rainer Hersch’s comedy routine featuring a Chopin Prelude.

Or, it could have been inspired by the second movement of Charles Ives’ Concord Sonata.  Ives, a master of writing unusual combinations of notes, called for a 14 and ¾ inch long piece of wood to play a cluster chord.  Start watching at 1:45.

Igudesman and Joo’s  comedy routine not only made viewers around the world chuckle, but they were inspirational (for me, at least!).  During my senior year at the University of New Hampshire, I studied Copland’s Piano Variations.  One variation has octaves in both hands.  (I can reach a sixth.)  The variation is bombastic and it sounded too puny with only one note in my right hand.  It was then that my teacher, Arlene Kies, told me about an idea she had.  (Apparently, Arlene had been thinking about this idea for quite some time, but she was unsure about how I would react!)  What if I had something that I could pick up and use to play an octave?

Contrary to Arlene’s fear, I was not at all put off by the idea, but instead went straight to work to create such a device.  My first attempt was simple: two pencils and some rubber bands. 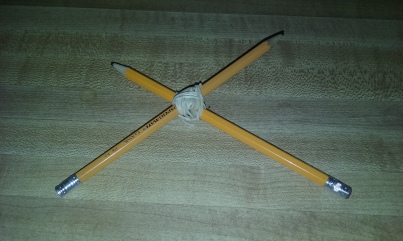 This worked fairly well; the cross was easy to hold.  My dad and I made a few more prototypes out of Tinker Toys and wooden dowels.  Eventually, I found a design that I liked.  Robert Englund, a woodturner in New Hampshire, created the final product.  The cross is placed off-center to voice one note louder than the other.  I experimented with several materials to put on the end of the wooden legs.  The wood itself was too loud.  Felt was too slippery.  The winning material: wine cork!

The Octave Device, as I have named it, works fairly well as an extension of my hand.  It is most useful for long passages of octaves with time to pick up and put down the device.  Watch me demonstrate!

P.S. Just for the record, I’m not the first pianist with a limb difference to think about doing this!

Check out this clip, supposedly featuring an Australian from 1933!

In 1906, Burt Amend was granted a patent for his device to play chords.